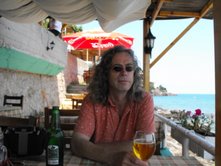 Gerard J Kelly was born in Burin, Newfoundland in 1960. He grew up in Marystown on the Burin Peninsula. His high school art teacher, Ron Freddette, enabled Gerard to go to Saint Michaels Print Shop, then located in Saint Michaels and work with Don Wright for two weeks in 1979. Don influenced Gerard’s decision to enroll in the Visual Arts Program opening up at Bay St. George Community College in 1980,(now CONA). Gerard’s relationship with Don Wright continued until Don’s untimely death in the mid 80’s. In 1982 Gerard graduated from the Visual Arts Program at BSGCC, with a Diploma in Visual Arts, and started work on his BFA at the Nova Scotia College of Art and Design. Having studied mostly all painting, and drawing, Gerard’s intention to become a painter was interrupted by faith.

“I was working back shifts at a Green Gables store and slept in on Registration day. By the time I got to the College all the classes were filled. Administration found a spot for me in the first year sculpture class, and I never looked back!”

At NSCAD Gerard excelled at sculpture, being first in the class in first year and maintaining a high standing thorough out his studies. While studying for his Bachelors Gerard held his first solo exhibit at the LSPU Hall Gallery in St. John’s, Newfoundland, “Three Pieces of Art”. Gerard graduated from NSCAD in 1986 with a BFA and a major in sculpture. Gerard’s graduating exhibit was shared with an Ontario artist and was called “Myth-Guided Youth”. Mythology is a theme that has run through his work since.

After graduating from NSCAD, Gerard moved to New Brunswick and lived in Saint John, and Fredericton, where he exhibited at the Windrush Gallery in Saint John in 1987 and at Gallery Connection in Fredericton in 1989.

Gerard has been working as Sculpture Technician at Sir Wilfred Grenfell College, MUN, since 1997. He has built bronze furnaces and helped develop bronze casting using the lost wax method at SWGC, though he primarily works in stone. He has used Arts and Culture Centers across the island to bring his art to a broad Newfoundland audience and has taken part in political discussions and news interviews forwarding the causes of Newfoundland artists.

In 2005 Gerard was selected as one of eight stone carvers from across Canada to take part in the first Atlantic Stone Carving Symposium which was held in Inverness, NS. Gerard is represented by the Red Ochre Gallery in St. John’s and State of the Art Gallery in Corner Brook. Gerard has work in many private, corporate and Government collections, and as an artist continues to promote Newfoundland art and artists, as well as Newfoundland marble, throughout the world. During the summer of 2008 Gerard travelled to Bulgaria to do research on the pointing system of stone carving and visit archeological sites and museums. Since his return, Gerard has started work on a new series of stone carvings based on Thracian motifs, which he will carve at his studio, “Quarry Studio” in Irishtown, Newfoundland.

Gerard joined the VANL board in 2008 and has proved a very active member, as both Co-Chair of the Advocacy Committee, and the VANL representative on the CARFAC National Board of Directors.

1. When did you first realize that you wanted to become an artist?

Don Wright talked me into it, during a visit to Saint Michael’s. I had been picked to go there by my high school for a week of workshops with Don. They were starting the new program at Bay St. George Community College in Stephenville, and Don told me I was too late to register, but if I was interested to show up registration day. I was hitching to St. John’s to attend MUN but got stuck at Goobies, and couldn’t get a lift, so I crossed the road and hitched to Stephenville.

I mostly work in marble. I learned to stone carve at NSCAD from John Greer, and marble was expensive there. I used old headstones mostly. After I started work in Corner Brook, I was introduced to the marble in the area, and was amazed at the variety and availability of it! It’s free, and they make gravel from it here! That’s crazy! The streets here are literally paved in marble.

My ideas come from a cosmic miasma of thought left there for the pickings by generations of people who came before me. I think Jung referred to it as the collective unconscious. I also read a lot, and travel when I can.

5. What are the ‘big’ themes in your artwork?

A search for identity, as a human race, and as an individual within that context.

6. What is the greatest challenge you face as an artist working in Newfoundland and Labrador?

Finding a place to exhibit! Shipping cost too, stone is as heavy as rock!

Free materials! Here on the west coast is an abundance of marble and birch for carving. I was born here as well, and my attachment for this province runs deep within my veins. I love Newfoundland.

I would like to be carving in my back yard, overlooking the Black Sea in Sozopol, Bulgaria..:)

9. If you weren’t an artist, what would you be doing?

Furniture designer and maker. I have had one chair I designed exhibited at Devon House, SWGC Gallery and three galleries in Ireland.

To have the freedom to carve everyday for the rest of my life and not have to worry about bills, mortages, truck payments, etc….or have to work for anyone else, in order to survive.

Want to be our next Member of the Month? Submit your answers to the 10 Questions listed above, plus a jpeg photo and a bio before the first Monday of each month to be entered in the random draw.  All submissions should be emailed to sara@vanl-carfac.com. We reserve the right to edit for content and length.