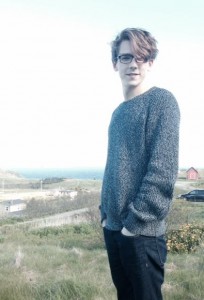 Based in St. John’s, Duncan is an artist, designer, husband and dad. Following an early start in the working art world as printer’s devil to Tara Bryan of walking bird press, Duncan founded his own imprint, Walpurgis Press, which produces cards, prints and books with an eye to the offbeat. In his role as an art director and designer at Perfect Day, Duncan received a Juno nomination in 2016 for his work on the Long Distance Runners album Elements. As a linocut artist, Duncan has illustrated seven books, most recently, The Card Game (Running the Goat Books & Broadsides, 2015) and The Bears Come to Tea (walking bird press, 2015). In 2016 he wrote, directed and animated little big bang, a one minute linocut animation produced by the NFB. duncanmajor.com

1. When did you first realize you wanted to become an artist?

I always felt a desire to create — drawings, imaginary worlds, prints, posters, stories, poems or melodies.  I think the realization that I wanted to be an artist didn’t come until I already was one, in my heart. Then it became a matter of accepting that title, which was hard, because I’ve never been a full time working artist and I don’t make one kind of art.

In visual art, I’m a printmaker and letterpress printer thanks to Tara Bryan, who graciously hired me when I was a teenager as her printer’s devil at walking bird press. As her apprentice, I learned etching, block printing, bookmaking, and letterpress printing. I also draw. I like anything inky. I just finished a three month apprenticeship program with the NFB where I made a one minute animation with linocuts – making the linocuts move was an exciting new process for me.

In my case, ideas come through a mixture of everyday observation and active periods of thinking and note-taking. I keep a log of ideas on my phone and in various (unkempt) notebooks and slips of paper. I try maintain this practice even when I don’t think the ideas are great, which is often. Like keeping the tap running in case the water suddenly turns into bourbon. Lately I’ve been trying out stream of consciousness note-taking to get the ideas out.

5. What are the “big” themes in your artwork.

Language and the relationship between words, emotions and pictures; the seeming randomness of life; the natural world; outer space; love; past generations and eras; the passing of time.

6. What is the greatest challenge you face as an artist working in Nfld & Lab?

It’s probably the same as the greatest advantage: that we’re quite secluded physically and psychologically. There is a sense here of an outside world and that we don’t really belong in it.

Another challenge is our contradictory relationship to art. As a province, we wear art and culture on our sleeve, but I don’t think it’s taken seriously enough economically or politically yet. It feels like artists are constantly having to prove their worth and economic viability to government; there’s a distrust there. We have some great funding programs, but if there was more investment in artist development, I think the province would only reap the benefits. Art is fertilizer for so many things, economically and culturally.

Proximity to nature, to something that feels ancient.

9. If you werenʼt an artist, what would you be doing?

That kids with illnesses could be granted three.