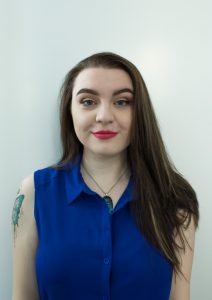 Emma Burry is an interdisciplinary artist from the island of Newfoundland. She has spent much of her life just steps from the ocean and has allowed these experiences to influence her art practice.

Emma is a recent grad of the Bachelor of Fine Arts degree program at Grenfell Campus, Memorial University. She is now about to begin the Master of Fine Arts program at Emily Carr University of Art & Design in Vancouver, BC in the fall of 2018.

Emma has travelled to England for a semester of study for the Harlow summer program and while there showed her work at the Gatehouse Arts in Essex. Emma Burry has been recognized by her professors in the Visual Arts program at Grenfell and was awarded The Cottage Crafts Association Scholarship during winter 2018 and The Raymond J.G. Pafford (1937-1997) Memorial Scholarship during the winter of 2017.

Primarily my work deals with themes of home, and impermanence. Landscape is a large influence on my practice and provides me with a “muse” of sorts in order to explore these themes. I use the horizon and my own personal experiences with the land to express the concepts and feelings that surface while in the studio.

Home is a loaded term in my practice because it speaks to place but it also corresponds with stability, comfort, and a sense of longing. For the most part I continuously attempt to find/create a space where I belong by depicting the environment around me the way I visualize it.

I like to say I primarily work with paint however, my practice spans across many mediums. I drift between different ways of working in order to create the experiences that fit my concepts. My art practice, and my own personality has never had the ability to be confined by just one way of working. To be blatantly honest I get extremely bored just working with the same materials. How can you depict life and experience accurately through one way of working? I enjoy having the freedom to explore and experiment and wouldn’t have it any other way.

Lately I’ve been working with paint, weaving, and a bit of ceramics but it is time for a slight change.

Living in Newfoundland and Labrador has influenced me dramatically. My practice revolves around my less than stable upbringing, and how I found comfort within the horizon where sea and sky meet. Each summer spent with grandparents in out port Newfoundland became a conduit for deeper contemplation between the land, and me. The lack of children my age forced me to experience the landscape alone, and allowed me to conjure deep relationships with the wildlife and scenery. Without those many months I do not know where I would have found my solace or inspiration. Newfoundland became not only a physical home but a mental cradle for my thoughts. This is what I try to express and pay homage to through my art.

You can not simply take a picture of the land in Newfoundland and capture its’ essence; Newfoundland by nature is ephemeral. It’s a place with endless horizons and infinite longing.

Thank you! Longing Expanse was the largest work I have ever completely and was my first major attempt at recreating the way I visualize the horizon.

I decided to look at the horizon and the colour blue, how it’s been depicted and what it symbolized throughout history. The research ended with me struggling with the concept that a single line was what housed my thoughts, experiences, and soul.

Interstitial is a word describing the space between two structures or objects. This interstitial space is exactly what I aimed to represent. My piece was meant to actively disrupt traditions of classical landscape painting in an attempt to show my own perspective. The “paintings” as I call them, are not stretched, nor are they hung on the wall. I used weaving to represent the liminal space where sea and sky tangle together and connected the two with the used of one continuous thread.

While the weaving is a visual representation of horizon, and how it spans over oceans, the labor and time spent weaving was what mimicked my own experiences with the horizon. Where a viewer may see a blue expanse of woven yarn I see a home and space that I physically created and resided in for hours and days.

The project ended up becoming a way to bring the horizon, or at least a memory of it, into an interior space. More personally, the project became something that reflected my relationship with the landscape around me.

The next step for me is something I am extremely excited about! A few months ago I received my acceptance to the Master of Fine Arts program at Emily Carr University of Art & Design. So, in the fall I will be moving from the East coast to the West coast of Canada to start a new adventure.