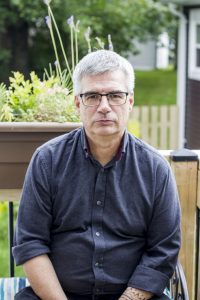 What was your artistic intention and creation process for Eymu’tiek?

I wanted to do a series of paintings about Identity ..about who we are as a people in  a contemporary sense.  I wanted the pieces to reflect not the sterotype of what people think a native person looks like, but focus on representations of people who are fiercely proud of their culture.  The process was I sought out people I know who fit that criteria and used them as reference to create the paintings.

What challenges do visual artists and/or Indigenous artists face in our province?

I think geography will always be our biggest challenge. I show out of province a lot and just something like shipping larger pieces becomes costly.  Traveling to shows near impossible.  The Artistic community in general and the indigenous community specifically is very close knit but the opportunities to get together and share ideas are often limited by the size of the province.

Who are your greatest artistic influences in any medium and why?

I am a self-professed art nerd..read tones of  art books so I draw influences from everywhere.  Admittedly I am a fan or representational work like  Edward Hopper and Grant Wood.  As well  I’m a huge fan of some contemporary Native American artists like TC Cannon , Fritz Scholder and Kevin Red Star. Also watch a lot of movies and read a lot of fiction.

What artists currently making art excite and inspire you today?

Jeremy Dutcher , who  won the 2018 Polaris Music Prize, said we are in the midst of an Indigenous renaissance and he is right, especially here in Newfoundland & Labrador.. Jordan Bennett, Meagan Musseau, Melissa Trembett. Marcus Gosse, Jennie Williams and of course Jerry Evans have made it an exciting time to be an indigenous artist in this province today.

What are you working on now/intend to pursue artistically in future?

Right now I am finishing a piece for a group show at the Abbe Museum in Maine. Then the plan is to work on more pieces for a show at Grenfell Art Gallery later this year as well as hopefully a solo show in the US in the fall.  I’m busy and enjoying doing the work.

Nelson White was born in the small community of Flat Bay, Newfoundland as a member of the Qalipu Mi’kmaq First Nation Band. His father is a respected elder who was recently awarded the Order of Newfoundland for his lifetime of lobbying for the rights of Mi’kmaq in the province. Nelson attended the Visual Arts program at the then Bay St. George Community College and later the Nova Scotia College of Art and Design. His pieces exhibited frequently throughout Canada in both group and solo shows. His work can be found in several private and public collections.