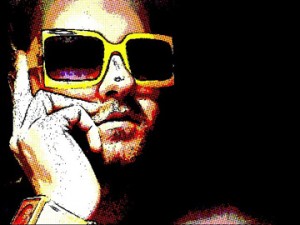 Mark Adams of Corner Brook is currently completing the fourth year of his BFA at Sir Wilfred Grenfell College. Mark works in a variety in mediums, including painting, various printmaking mediums and video.
When did you first realize that you wanted to become an artist?
It was when I was 15, I went to New Brunswick and viewed an in-house studio and selected work by artist Dale Carruthers. The Immense amount of work done floored me and, from then on, I knew I at least wanted to make something of painting.
What mediums do you work in and why?
I believe versatility is quite important. I’ll work in a variety of mediums, choosing whichever I believe can suit a project well. Currently I’m working expressively in painting, creating representative work in Printmaking and abstract/conceptual work in Video and digital imaging. This trend is bound to change as I develop further ideas.
How do you get ideas for your artwork?
Overthinking. Some think it’s dangerous to do, but I end up generating so many ideas that way. Other people’s artworks, public imagery, music, movies, the web, it’s all basis for information that we can all tap into. I made one show of paintings from a few paragraphs of Margaret Atwood talking about her observations in writing her novels.
What other artists influence your artwork?
I’m particularly fond of Nam June Paik’s work, Bruce Nauman, just guys that bounce around ideas and make them appear in different ways (“Violin-Violence”). It’s work that can be both poignant and clever, but innate and unimportant. I can find technical inspiration from artists a little closer to home, like David Blackwood and Jon Wilkinson.
What are the ‘big’ themes in your artwork?
I don’t like to think I have any major themes to my work. I enjoy making work that can be evocative, even provocative. Work that can jump-start thinking and interest in art or just visual language. I’d rather have the viewer that will stick with one painting to look at and think over, rather than the viewer that’ll take in all the work and verify that it’s under the “Mark Adams” theme. The versatility I wish to have allows room for all sorts of themes, be it commentary on socio-political happenings or just visuals inspired by written work or music.

What is the greatest challenge you face as an artist working in Newfoundland and Labrador?

I think it’s working and learning within a culture that doesn’t have a high enough regard of art. Let’s be frank and honest about it. Public Schools in the province are choosing art/drama classes first when cutting from programs to save money. When I went to go to art school, it had been 7 years since I had taken a course in art from the public school sector. Besides St. Johns, there are not enough Visual Art centers in the province to exhibit work in. More often than not I’m explaining to the public WHY I’m practicing art and not WHAT I’m practicing in art and I think it needs to be the other way around. It can be disadvantageous to upcoming artists and if we don’t change that, then this place cannot be seen as prosperous for future artists.

What is the best thing about working as an artist in this province?

It’s the other side of the coin – you have a creative autonomy, in a way. I can make something and not feel pressured, either commercially or artistically, by outside groups or institutes.  Also because populations are so small, Ifind people within arts are making connections with people in music and then people in stage acting or comedy. It makes for a great community dynamic sometimes, whereas larger centers would have groups of painters, groups of sculptors, groups of jazz singers, etc.

Where do you see yourself in 10 years?

It’s never easy to tell. I would eventually like to get my Masters in Fine Arts, preferably in studio work, industrial design, something along those lines. I know I’ll keep making art, it’s just inevitable.

If you weren’t an artist, what would you be doing?

I have a knack for computers, so perhaps something in the computer engineering/service field. I did look at architecture, but thought it would get too competitive for me once I was out in the workforce. DJing and making electronic music is another one of my passions (under the moniker “MD”) that I follow through today and probably would carry out further if I weren’t an artist.

If you could have one wish granted, what would it be?

Oh, didn’t expect this question, haha. Ummm, let’s see. I would wish that Canada would take art more seriously, that the industry was more vibrant. I just got back from a class field trip to Harlow, England to, in a broad sense, explore London’s artistic sectors. They incorporate the visual sense into so much of daily life. Are we, in Canada, over the Group of Seven yet? I don’t think we are. We only seem to have pride in artists that become successes elsewhere (Peter Doig comes to mind) and we barely have anything designed by homegrown architect Frank Gehry. We could be so much ahead of ourselves in the art world if we could just make art a priority.