The Excellence in Visual Arts Awards, also known as the EVAs, are the only awards program in the province solely dedicated to honouring the achievements of our local visual artists. The EVA awards celebrate artists in all media – painting, photography, sculpture, fine craft, mixed media, installation, performance and more – from all over the province. Awards are given in several categories, including awards for lifetime achievement, mid-career and emerging artists, as well as art writers and supporters of visual art. The 7th annual EVA Awards will take place at The Rooms on May 25th, 2012, hosted by Ingrid Mary Percy and Gerri-Lynn Mackey. The reception is at 8 pm, featuring music by Quinton and Rose. All are welcome, so come join the celebration.

The Emerging Artist Award honors the promising start made by an emerging visual artist in the early stages of their career. Sponsored by Grenfell Campus, Memorial University. Prize: $1000

The Large Year Award celebrates a visual artist who has enjoyed an exceptional year, with at least one exhibition and critical recognition.  Sponsored by Sheppard Case Architects, Inc.  Prize: $1000

The Long Haul Award recognizes a substantial contribution to the visual culture of Newfoundland and Labrador by a senior artist.  Prize: $1000 and a lifetime membership for VANL-CARFAC. Sponsored by The Leyton Gallery of Fine Art.

The Kippy Goins Award– so named for the small pieces of wood one throws on a fire to “keep it going” – thanks an individual or organization whose efforts have helped to sustain and build the visual arts sector.  Sponsored by Christina Parker Gallery and the City of St. John’s.  Prize: original artwork by Michael Pittman.

The Critical Eye Award recognizes a visual arts writer for an exceptional piece of writing on an NL artist in any print or online publication worldwide. This award is co-sponsored by Angela Antle and an anonymous donor. Prize: $1000.

The winners will be announced at the Awards Ceremony on May 25th.

Reserve a seat to the EVAs by calling 738-7303 or emailing vanl-carfac@nf.aibn.com. 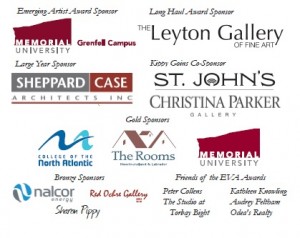