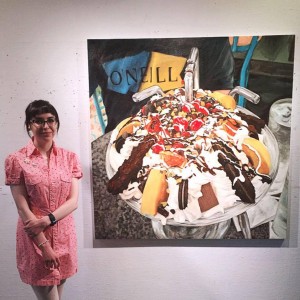 Kristen Thornhill is a student in her final year at MUN’s Grenfell Campus, focusing mainly in the areas of painting and photography. Kristen grew up in the small town of Winterland, and currently resides in Corner Brook. She has exhibited locally as well as in British Colombia and Harlow, England, during her three month study program there.

Though she often does commission work, her personal art tends to borrow from an interest in film and pop culture. Faces and food are her most common subjects. Her work can be found online at www.kristenthornhill.wix.com/artwork , or on Facebook as Kristen Thornhill Artwork.

1. Where did you first realize you were interested in art?

I’ve been drawing since before I can remember. It didn’t develop into anything serious until maybe junior high or high school, but it was always there.

2. What mediums are you drawn to and why?

Paint is my main thing, acrylic and oil. I think it’s the texture, kind of goopy and gross. I also really like ink. I want to get into tattooing, actually; I used to be into special effects makeup and body art but my skin can’t handle the products anymore. And there’s something I like about the permanence of tattoos, like it represents one specific moment in your life, even if the tattoo is just something you thought looked cool. Also a big fan of film photography for the same reason, it makes me be a lot more careful and thoughtful than digital.

I’m influenced by really mundane things. I paint things I see often. I don’t really consider myself to be that creative, I just recreate things that are already there, or stitch them together in a way that I think is cool.

4. What type of artists do you find influential and why?

I’m a huge fan of horror. Charles Burns’ “Black Hole” seriously changed my life. At the same time, I love art history. The Pre-Raphaelite’s, Watteau, Bosch… I like things that can be interpreted a bit darker I guess. Maybe those things aren’t always meant to be seen that way, but oh well.

5. What are the “big” themes you are drawn to in artwork?

Insecurities are something I deal with a lot, but I’m not in a way that’s obvious to the viewer. I just work through my own problems through the stuff I paint. To anyone else, it just looks like a self portrait or an ice cream sundae or whatever but it’s usually more personal than that. That said, I don’t think everything needs to be complicated and deep all the time. I also just paint stuff because I want to.

6. What do you think is the greatest challenge an artist working in Nfld & Lab faces?

We have a great arts community here, but there’s a bit of a pressure to either fit in as a contemporary artist or a traditional artist. There are limitations around both, I find. There also isn’t much appreciation for photography here outside of landscapes and portraiture, at least not that I’ve found.

7. What do you think is the best thing about working as an artist in this province?

There’s so much support here, not just from other artists but from the province as a whole. Not to mention inspiring. This place is beautiful and full of interesting people.

A high school art and English teacher (after my BFA I plan to get a teaching degree), also a tattoo artist, with like seven Boston Terriers, spending 75% of my time in the back of a bright orange camper van.

9. If you werenʼt an artist, what sort of art-related things would you be interested getting involved in?

If I weren’t an artist I actually have no idea what I’d do. Everything I do is related to art in some way. Maybe I’d make movies or something. That’s still art though. Maybe a critic or something. I’d be a horrible critic though, I love everything.

I’d like to have the ability to freeze time. But realistically, I just want someone to take me on as a tattoo apprentice next year.