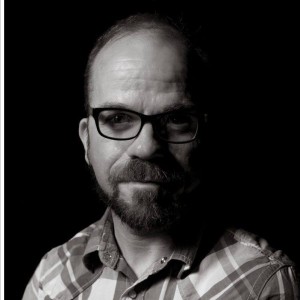 Mercer is a full-time, self-employed visual artist living off sales and commissions of his work. He also gives private instruction to children, adults and people with special needs.

Mercer’s practice has ventured into visual languages that include hard edge abstraction and materials such as seal skin to create works in defense (and celebration) of his culture, but he is best known for his realist, narrative, figurative paintings and prints that are often allegorical.

Executed with the classical precision of the Old Masters, Mercer’s paintings possess the same haunting resonance that can be identified in the work of Alex Colville or Christopher Pratt.

Mercer draws heavily on Baroque traditions such as chiaroscuro (intense light and dark), rich colour, drama, and tenebrism (dramatic illumination) to generate mood and tone. The contemporary subjects (modeled after photographs of friends and/or recognizable figures in his community) posed in interior spaces or black theatrical voids, act out narratives that transform ordinary things and people into evocative spaces of mystical contemplation.

1. When did you first realize that you wanted to become an artist?

As far back as grade school.. In grade two friends and family liked my doodles and were very encouraging. I enjoyed how these little drawings and would get people excited. As I got older, more notably at the time I was in grade six I was introduced to the works of Gerald Squires, Mary Pratt, Christopher Pratt, Don Wright and Stewart Montgomerie. Their works were featured in “Doryloads” which was a school text book produced by Kevin Major for Breakwater Books. A little later our school art club went on a field trip that visited the then newly opened Emma Butler Gallery. The works of Bill Ritchie and the Pratts had a huge effect. Even though I was still very much “just a puppy” I did sense that there was much more to the works than the image. You could feel it. I thought “That’s a good job!”

I work in oils, acrylic, various drawing media and printmaking. In my own practice I enjoy very much the act of drawing. I enjoy the craft of making pictures and recognise the value of drawing and how it is often the “starting point”

3. What other artists influence your artwork?

That’s a big question and a really good one! I would confidently say that every artist I have been exposed to have had an influence on my work. They reinforce, sometimes change and other times dismiss my ideas about art and my art practice.

4. What are the ‘big’ themes in your artwork?

Change, place, permanence, order, disorder, chaos, I could go on. My work is multilayered. Its relationship to the viewer, myself and the time period it in which it is viewed is not necessarily one in the same.

5. What is the greatest challenge you face as an artist working in Newfoundland and Labrador?

The arts are a renewable resource that brings new dollars into the province. It is the artists that facilitate and sustain the culture yet it is so vastly underfunded. More money need to be invested. It has been proven time and time again in outside regions how investment into the arts boosts the economy. While it is great that money is provided to promote the culture with colourful TV and print ads to boost tourism it also seems somewhat redundant if the said culture is suffering to the point where it becomes even impossible for some to engage in an arts practice.

6. What is the best thing about working as an artist in this province?

In the global community this province is unique in what it presents to the world stage. It is both contemporary and well rooted. It is ever evolving. I can never give what I have received from this province’s artists. To even be some small part of that is incredible and something i don’t take lightly.

In my studio making pictures or preparing to do so.

8. If you weren’t an artist, what would you be doing?

I would be practicing medicine as a Paediatrician. Something I had strongly considered persuing when applying to university.

9. If you could have one wish granted, what would it be?